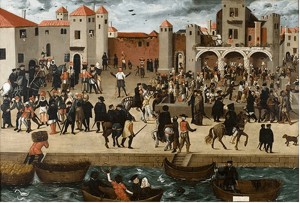 The project PWR Portugal 1300-1910 builds on 2 quite distinct historiographical currents, which it seeks to bring together with a case study on Portugal between 1300 and 1910.

The first arises from the study of economic growth during the last 2 centuries, a period of unparalleled expansion of population, output and productivity, starting in the West and reaching now a global scale.

Subject to successive revisions during the last 50 years, the prevailing view today is that the Industrial Revolution was a decisive break, but not as sudden and dramatic as claimed earlier. It occurred in a region – Northwest Europe – which had experienced growth already for more than a century, along with urbanization, agricultural improvement and a rise in living standards. In the rest of Europe, from 1500 to 1750 income per capita declined or stagnated, and conditions for economic acceleration were therefore absent. This was the Great Divergence in Wages and Prices (R. Allen, “The Great Divergence in European Wages and Prices from the Middle Ages to the First World War”, Explorations in Economic History , 38, 2001, 411.447), which is at the heart of one of the main debates in long term comparative economic history (J. van Zanden, “Wages and the Standard of Living in Europe, 1500-1800”,European Review of Economic History , 3, 1999, 643-64; A. Maddison,The World Economy: a Millennial Perspective , Paris, 2001).

Following a suggestion by J. G. Williamson (“The Evolution of Global Labor Markets since 1830”, Explorations in Economic History , 32, 1995, 141-97), it involves estimating income per capita from the real wages of urban labour across Europe over long intervals, using a purchasing power parity methodology based on extensive price information and a common basket of consumption goods. The goal is to map the intensity and timing of the divergence in order to understand which factors – demography, technology, urbanization, trade, institutions, colonial history and the like – were its main determinants.

A second strand in this historiography has to do with income distribution, a topic often connected to development and urbanization (P. Hoffman et al, “Sketching the Rise of Real Inequality in Early Modern Europe”, in R. Allen et al. (eds.) Living Standards in the Past , Oxford, 2005). 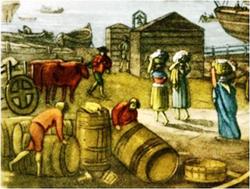 The Great Divergence of Wages and Prices implied an increase in the inequality of this distribution among nations, but it was also accompanied by a similar movement within nations. The main reasons were the rise of population, a concentrated system of landownership, the Law of Engel and technical progress. The prices of “luxuries” fell relative to that of staples and rents. This favoured the rich and the owners of the means of production relative to the poor. All land-intensive production became relatively more costly, while labour-intensive services became relatively cheaper. The result was the downward pressure on real wages noted above.

Apart from a valuable explanation for the secular fall in real wages, this approach raises a crucial point: can we really infer income per capita directly from real wages? The bias comes from missing the more urban, service and manufacturing-oriented economic activities, which were expanding rapidly and pushing up the level of income per capita, especially in the more advanced countries of the Northwest. Price and wage research dates back to the 1930s or before.

In this new version, it is still young and faces several difficulties. Data is scarce, particularly on Asia. There is a need to “regionalize” the analysis and cover countries better. The use of real wages as a proxy for national product per capita must be reconciled with the distributional issue. A consistent economic interpretation of the long run data in terms of the “big questions” – convergence, divergence, stagnation, development – is needed. The debate is still too focused on collecting and refining the data.

A third strand of this historiography broadens the discussion to ask whether there was a Great Divergence also between Europe and India and China. According to Pomerantz (_The Great Divergence: China, Europe and the Making of the Modern World_ , Princeton, N.J., 2000) and others, between the 16th and the 18th centuries, both regions’ real wages were on a par with Western Europe. Intercontinental per capita income divergence only happened upon industrialization. Before the 18th century, real wages in Europe could not have risen much therefore and this casts doubts on the idea of a Great Divergence there.

This “pessimistic” view has been strongly criticised by Maddison (2001), who contrasts a stagnant Asia, from the 16th century on, with a slowly growing Europe right up to the onset of industrialization. Portugal, with its long tradition of presence in Asia, is a valuable addition to this second debate because it can help answer the question, asked by S. Broadberry and B. Gupta (“The Early Modern Great Divergence: Wages, Prices and Economic Developments in Europe and Asia, 1500-1800”, Economic History Review , LIX, 2006, 2-31): was early modern Asia more like the backward parts of Europe (including Portugal?) but far different from the Northwest’s, and therefore never likely to harbour any sort of “industrial revolution”?

Our 2nd historiographical current arises from Portuguese price history and the interpretations of economic performance it has stimulated. The former has a solid tradition, inaugurated by V. M. Godinho (_Prix et Monnaies, 1750-1850_ , Lisboa, 1955) and with many followers down to the present (J. Romero de Magalhães, O Algarve Económico, 1600-1773 , Lisboa, 1993; Rui Santos, Sociogénese do Latifundismo Moderno : Mercados, Crises e Mudança na Região de Évora, Séculos XVII A XIX , Lisboa, 2003). Altogether, it covers the country well, but is patchy over time – no town or region is observed for more than two centuries – and it is much weaker when it comes to wages or rents.

Not much effort has been made, however, to gather this data into a single homogenous and consistent data base, or to produce weighted indices, except for the 19th century (D. Justino, Preços e Salários em Portugal (1850-1912) , Lisboa, 1990). This is in harmony with the lack of preoccupation shown by Portuguese historians in producing a coherent interpretation of national macroeconomic history over 4 centuries. Instead, prices have been used to study a succession of cycles seen as occurring around a horizontal trend line, in other words, in a static and Malthusian perspective inspired by the Annales school (J. Nunes de Oliveira, A Beira Alta de 1700 a 1840: Gentes e Subsistência , Viseu, 2002).

These cycles are not treated, however, as part of a longer run process and therefore have not been linked up to each other in order to obtain a fuller picture. The possibility of changes in the global productivity of the economy or market and technology-induced structural shifts influencing living standards, on the whole has also not been considered. Given the strong emphasis on the prices of agricultural staples, the part of the urban sector in accounting for the movements of the national economy has not been given much importance either.

Curiously, despite the prevalence of the idea of “decadence”, the notion of systematic decline over centuries in the very long term is unexplainably absent from the discipline’s worries (in contrast with the international historiography – see above). For most authors, the colonies, the excessive weight of the state and the submission of Portugal to foreign interests have had the central role in accounting for the behaviour of the Portuguese economy (V.M. Godinho, Estrutura da Antiga Sociedade Portuguesa , Lisboa, 1971).

Indeed, they seem to have mattered more than anything else, not only in the 16th century, but also in the crisis of the 17th century, during the reversals of the 18th century (J. Lúcio de Azevedo, Épocas de Portugal Económico , Lisboa, 1929). Their impact in the 19th century has equally served to underscore this importance (J. Pedreira, Estrutura Industrial e Mercado Colonial: Portugal e Brasil (1780-1830) , Linda-a Velha, 1994). 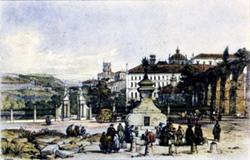 Yet price indicators have hardly been used as empirical proof for any of these relationships. The only macroeconomic model to have sprung from the efforts of Portuguese price historians is that which V. M. Godinho himself ( Prix et Monnaies, 1750-1850 , Lisboa, 1955) devised to explain the ebb and flow of efforts at industrialization over the centuries and their ultimate failure. Its underlying hypothesis is that manufacturing would only develop with official support and this was forthcoming only when falling or stagnant prices announced a recession in trade and agriculture or the colonies. Whenever this cycle changed, support ended and manufacturing fell back, again a static model.

Although this model would have difficulty today in meeting the exacting standards of the Cliometric school, it has provoked considerable and useful debate, and revealed that such approaches, based on solid evidence, may stir anew interest in the long term evolution of the Portuguese economy, which is the object of this project.