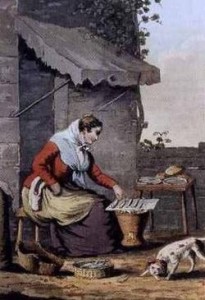 The series of prices, wages and rents presented here were obtained from the archives of a variety of institutions, namely hospitals, charitable institutions (Misericórdias), convents and monasteries, the royal palaces, municipal bodies (including those which regulated markets), the University of Coimbra, seminaries, and from legislation in general.

Throughout the collection of these data preference was always given to those arising out of market transactions. Occasionally, however, when there was no alternative, we resorted to information of a non-market nature, such as prices or wages administered by public bodies, at the national and local levels. These are signalled in the base with an asterisk. Prices shown are annual and always refer to the principal city of the three regions selected for this study. In other words, they are no “national” prices. For each year,the modus operandi was to collect information for all the transactions which occured in one or more institutions during the four months which were chosen as being representative of the seasons of the agricultural calender. This principle, however, was not applied rigidly, given that sufficient data was not always available.

Each annual price was obtained by dividing the total value of all the transactions in that year, for which prices and quantities were available, by the the total amount of merchandise transacted. In other words, it is a mean of prices weighted by quantities.

Like prices,wages are annual and always refer to the principal city of the three regions selected for this study. For each year,the modus operandi is similar to the one followed for prices.

Wages are divided into two categories: daily wages and monthly or annual salaries. Daily wages are, generally, dry wages. Quite the opposite, annual salaries often include supplements (housing, foodstuffs, fees) which were recorded and added to cash salary in column B.